BikeTrial, is a sport born in Catalunya, and this year for the second edition, the World BikeTrial Indoor Cup will be held in one of the most important locations of the city: the Barcelona water…

The Insomniac and The Race Boy Rode In Shah Alam

Last Saturday, we spent some time riding at Shah Alam Taman Tasik (Lake Garden). Since 6:00am that morning, Wyatt (aka "The Insomniac") had been riding around his house in Sungai Long, practicing track-stand and hopping. Later he joined Syarul (aka "The Race Boy") in Shah Alam. 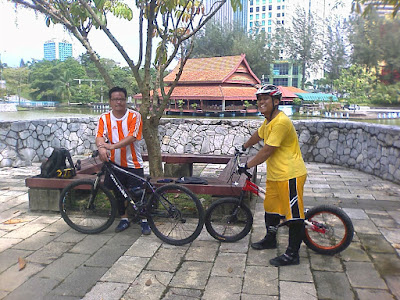 I joined them later at about 1:30pm. By then, I could see that Wyatt was extremely tired. Man... I had thought that he was either nuts or just plain crazy about…

Setting Up a Semi-permanent Place for BikeTrials Training

For the longest time, I have been repetitively watching a lot of competition videos from BikeTrials.com and one of my favourites was the Bar-H Bash Competition, where they rode man-made sections. That gave me the idea and the yearning to want to set up a mock section similar to that at home. 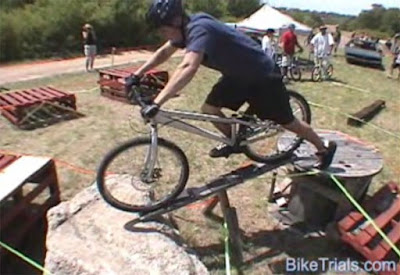 And so I began collecting wooden pallets, starting with those, which I took from the BikeTrials demo by Walton, Ben and Nelwin; organised by Syarul. I…

It has been more than a year since I started taking an interest in BikeTrials. Personally, I know of less than 10 persons in Malaysia, whom are interested in BikeTrials, and even less if I count those who ride trials. BikeTrials has been around for so many years the World over.

It is also a cycling sport that is sanctioned by UCI (International Cycling Union). Our neighbours bordering us, Singapore and Thailand, have a much bigger BikeTrial following, with Singapore leading the…

Of Stems and Derailleur Hanger

When Sean and I first bought our Echo Pure trial bikes back in Mar 2008, the stems on the bikes were only temporary ones on loan to us, as ours had not arrived yet. 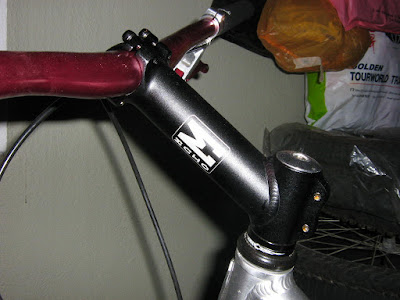 A couple of months later, the new stems arrived in Singapore but we could not picked them up. When Syarul was in Singapore last December for the 4th round of the Singapore National BikeTrial competition,…

Yesterday... I practiced, trained and practiced.

Sorry video is only available at the other blog... :-)

How To Prevent Hand Blister When Riding BikeTrials

I have been having major blister problems on the palms of my hands whenever I ride. I have sweaty palms and wearing gloves does not help.

Normally, after about 20 minutes of riding, my gloves would be soaked with sweat and the skin on my palms would be soft and wrinkled. That's when the hardened skin of the blisters would get soft and the new blister which had formed underneath the old one would get irritated. The constant chafing made it worse and the irritation gets pretty…

My New Milestone in BikeTrials - Conquering a Section

After 14 months of learning and training the basic skills of BikeTrials, I have decided to test myself on a home-made section.

The design of the section had to be within my current skill level. I remembered a friend from Singapore telling me that, you only need to master 3 basic BikeTrial skills to be able to compete. And they are track-stand, hopping and pivoting.

I dun think I have mastered those 3 skills, probably intermediate level... or less... LOL. The full list…

Christmas BikeTrials and Trouble with a Pair of Reebok

Earlier this week I received a text message from Syarul to go riding trials on Christmas day. I had to turn him down as I was not mobile due to a bad car accident a few weeks ago that put my pick-up in the workshop.

My last biketrial outing was to the Shah Alam Xtreme park and since then, I had only been riding in and around my house. I missed a happening…

YEAH! There is progress in my BikeTrial!

What a great day this turned out to be! I think I have made tremendous progress with my biketrial skills. Three days ago, I tried to pedal-kick down a stack of 4 wooden pallets and landed disastrously! It was my first try at this height and I remembered it was quite scary and rightfully so!

Basically, when I landed, the rear wheel right brake pad slipped out. That caused the rear wheel to shoot forward from under me. I fell over backward and landed on my ass as I hit the rear of…

A Painful Milestone in Biketrial!

I have been trying very hard to learn the elusive "pedal kick" for a while now. My balancing on the rear wheel hop is not exactly very consistent, which makes learning the "pedal kick" doubly hard.

My arm and back muscles are constantly being pushed to their limits, with hardly enough time for them to recuperate.

Today, those muscles felt well enough for me to start practicing and I went at it with a vengeance.…

BikeTrial in Malaysia has future?

The past weeks while I was teaching my kids how to ride the bicycle, I was also riding my 20" trial bike with them. A boy about 10 or 11 years old was cycling past and saw me riding the Monty. He could not help it but noticed that the trial bike was without a seat.

So he stopped and asked me what bike the Monty was and how one would ride a seat-less bike. I tried explaining in my best Malay that it was called a trial bike and that we could ride it in many ways.